In 1837, President Andrew Jackson carted in a 1,400-pound block of cheese and invited the entire neighborhood to stop by the White House for a snack. He wanted to encourage the public to talk to the White House administration about issues they felt needed attention. As such, Big Block of Cheese Day was created and has famously lived on through tradition, television, and today – Social Media.

The NBC drama, The West Wing, brought Big Block of Cheese Day back to life in an episode where the Senior Staff is asked to have face-to-face meetings with citizens, groups, or committees to discuss government related questions. Although the show features fictional character and follows a fictional presidency, its popularity prompted real-life action by the Obama administration to take part in the twenty-first century’s version of Big Block of Cheese Day. No longer face-to-face meetings, people are tuning to social media to communicate with our country’s leaders.

On January 13th, the staff at the White House took part in the third annual Big Block of Cheese Day. In an article posted earlier that month, the White House asked people to turn to social media and connect with Senior Staff such as Communications Director Jen Psaki and Chief of Staff Denis McDonough. People took to Twitter, Facebook, Instagram, and Tumblr to ask their questions. You can review some of the conversations by searching the hashtag #BigBlockOfCheeseDay. 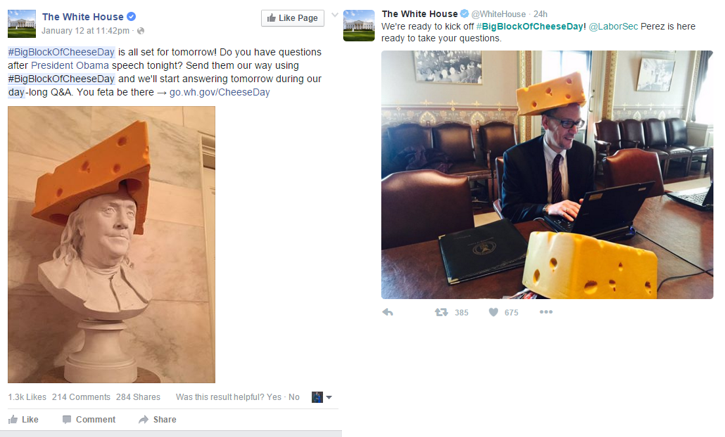 The Power of Social Media

The Obama administration had accepted the influence of social media and often throughout his career in politics he has turned to social platforms to gain support and inform the public of his political agenda.

In his 2012 re-election campaign, President Obama changed the way political campaign view online advertising and social media. From decision making to the general plan for his advertising operations, his presence on social media and engagement with his online advertisements greatly affected the outcome of the 2012 Presidential race.

This year’s Big Block of Cheese day is no different. The event followed President Obama’s final State of the Union Address on January 12th. Principal Deputy White House Press Secretary Eric Schultz and the Director of Public Engagement Paulette Aniskoff were specifically assigned to answer questions regarding the president’s speech in order to clarify specific issues or concerns.

Special guests that took part in the event included the First Lady Michelle Obama and the Vice President Joe Biden. They each spent time speaking to the public about different topics. While the First Lady took questions all throughout the day. VP Biden specifically addressed questions about the president’s “moon shot” to cure cancer that he had mentioned in his State of the Union Address.

As you learn about all the different topics that were discussed during the cheesy event, what can you learn and how can you apply the same social media strategy to your business?

The main purpose of the Big Block of Cheese day was to get people involved. It encouraged them to reach out and engage with people with a personal conversation. The goal of your social media strategy should be the similar if not the same. No matter if you own a business or are running an event, it should be a goal to get people interested in what you’re doing. Encourage people to learn more by posting questions; ask people to comment or tweet about any questions they might have. These are simple ways to generate interest about your business/event. Not only will people learn more about what you’re doing, but by engaging in a personal conversation, you’re developing leads and spreading brand awareness.

Big Block of Cheese Day was also a chance for the White House to clarify specific questions raised during the State of the Union Address. Successful posts on social media serve a purpose. Often people respond and engage more with educational posts. These can be anything from “how-to” blog articles or informational posts clarifying the purpose of your business/event.

Social media has the ability to open your business to a community full of potential leads in any industry. Take a lesson from Big Block of Cheese Day and use social platforms to reach out and communicate with your audience; clarify commonly asked questions and develop brand following by creating an active voice on sites that are becoming more and more reliable for people to visit and get information.

Whether you think of Big Block of Cheese Day as an important part of the presidential administration or simply a publicity push to increase the attention of the State of the Union Address, what you can’t deny is the importance today’s society puts on social media. We rely on it for a vast amount of our daily news and as a way to communicate between people, businesses, and customers.

Social media is a resource; one that’s becoming increasingly important in all industries. Start finding ways that your business can benefit from social media by learning about the many features social media platforms like Facebook, Twitter, Pinterest, and Instagram have to help businesses connect with their target audience. If you’d like to learn more about how online advertising is making an impact in today’s politics, make sure to check out these blogs.

“Candidates and Their Digital Ads”

If you’re interested in learning more about social media and how you can start using it today, click the image below and download our free social media whitepaper. 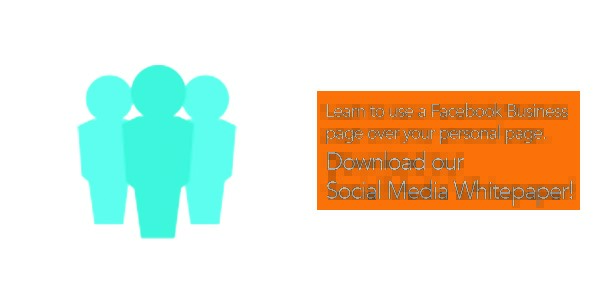