The hashtag is the social frenzy that has yet to die down. Baby pictures, workout statuses, and contest entries all are followed by hashtags, because in today’s social realm, nearly everyone uses hashtags. A quick browse on any social platform will show that the use of hashtags is still just as important and relevant in 2016 as it has been leading up to this point. Although hashtags are going strong, some businesses have yet to master and find value in the infamous # sign.

Well pretty much everyone has used a hashtag at some point in their life. The common use of the hashtag may surprise you, though – as 55.8% of tweets do not include a hashtag. People are aware of it, but they aren’t always using it. The most common use for hashtagging on Twitter is to join in on the conversation of a trending topic. Popular television shows and award programs, sports, social justice movements, and tragic events are some of the categories that are often trending and include hashtags. When a major crisis happens, such as the Orlando shootings this summer, Twitter users banded together showing support to the victims using the hashtag #PrayForOrlando. In 2015 the two most popular hashtags were #JeSuisParis and #BlackLivesMatter.

So Twitter users aren’t all using hashtags, but there is somewhere that hashtags are almost a necessity to get noticed and gain followers. Instagram was only found to have 13.8% of hashtag-less posts. Instagram posts are also more likely to include more than one hashtag as there is not a restrictive character limit like that found on Twitter. Looking at other platforms such a Facebook, hashtag use is more rare and sparse.

As a business, you may be wondering how to effectively use a hashtag to your advantage. There are a few uses that prove most beneficial to a business trying to master their #HashtagGame.

Building Brand Name Recognition: New brands can incorporate their name into a hashtag to build awareness and equity. Hashtags allow people to easily follow a brand and interact with that brand. Even established brands like Apple use hashtags, like when they announced the #iphone7 and the internet used the hashtag to voice their opinions about the new phone.

Participate in Conversations: One way for brands to find new customers and scope out their target audience is by joining in on already established hashtags. Of course, this has to be tasteful and they should only choose to participate when they can be relevant and authentic to that particular topic. By observing these conversations, brands can learn a lot about their target consumers and what really matters to them.

Hashtag Campaigns: Once a brand has established a following and knows what their customers like, they can roll out hashtag campaigns to build further engagement with their brand. These campaigns can be less branded and more fun and interactive. A great example of this was the #ShareaCoke campaign by Coca-Cola. We all remember searching for our name on a bottle, but that campaign went so much further than just the bottles. Online people shared their photos with the hashtag and gained millions of tweets and mentions.

Be careful, though, hashtag campaigns aren’t always successful. The internet can be a weird place sometimes and there are often conversations and topics that you don’t want to associate a hashtag with. Always research your hashtag extensively before launching a campaign and check for double meanings behind hashtags that might not send the same message. McDonalds learned the hard way in 2012 when they launched the #McDStories hashtag that quickly turned into a bashtag. Instead of people sharing positive McDonalds stories, Twitter users turned the campaign into a mockery of the fast food chain- and was taken down within two hours.

Along with researching your hashtag, there are a few more things you should be aware of when coming up with a new hashtag or incorporating hashtags in your social postings.

Frequency: There are some platforms like Instagram that have upwards of 11 hashtags on average, but it has been researched that using more than 3-4 on the platform actually decreases engagement. On Twitter, stick to just one hashtag as any more will also decrease engagement. If you are trying to gain followers, try to stick to the hashtags that will bring the most relevant audience to your content and avoid spewing off dozens of hashtags on your post. 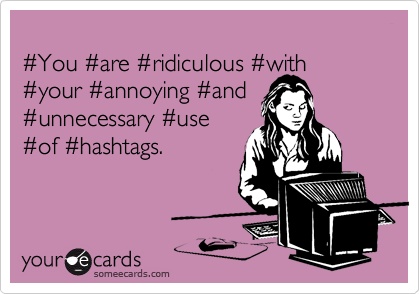 #ShortisSweet: #Noonewantstoreadareallylonghashtag so please limit your hashtags to a one or two simple and readable words. Complete thoughts or sentences simply do not translate well to the digital sphere of hashtags and will lack reliability.

Proofread: Don’t become the laughing stock of the internet trolls by misspelling your hashtag. Make sure that the words can be understood with no spaces and don’t send an alternate message or inappropriate words. You can use capitalization to distinguish your hashtag more clearly, but you will want to make sure that your followers can spell and read your hashtag correctly.

Hashtags don’t use spaces: Please, for the sake of all mankind, do not space your hashtag. First of all, it will only use the first word making your hashtag confusing and ineffective. Also, do not use symbols within your hashtag as they also break apart the words within (numbers are okay).

Now that you know the basics of hashtagging in 2016, use it to your advantage. Feel free to join in on conversations and create your own unique hashtags. Hashtags don’t seem to be going anywhere soon, so be sure to make the most of them in your social media strategy.