They’re roaming around the town. They’re walking in the streets – mindless of their surroundings with only one thing on their minds. No, it’s not the zombie apocalypse and their not hungry for brains. It’s Pokémon Go and these people are on the hunt for Pokémon.

The mobile app has only been available in the U.S. since Thursday, July 7th, but it has officially become a viral phenomenon.

What is Pokémon Go?

Besides being everything you’ve ever dreamed of, it’s an app on your mobile device that uses augmented reality and your GPS location to catch Pokémon. When you open the app, an animated map of your physical location shows up with your avatar in the middle. In order to find the Pokémon, you have to get out of your chair and walk around.

Clues throughout the map help you find where the Pokémon are. Visiting Poke Stops (pronounced “pokey”) and Poke Gyms, which are typically churches or landmarks around the city, become a necessity so you can gain more items like Pokeballs and potions to use to catch and heal your Pokémon.

These Poke Stops and Gyms are pre-determined locations that were based on another app from the Niantic Company. The main goal is to catch powerful Pokémon and to take control of Poke Gyms by fighting other trainers with your Pokémon. You get rewards and more items for your Pokémon if you’re a Gym Leader.

“I want to be the very best, like no one ever was”

Why has this app all of a sudden blown up and literally changed people’s day-to-day behavior? A big reason is nostalgia. People, especially millennials, grew up playing the card game and playing Pokémon on their Gameboys. Now they get the chance to play on their mobile devices, and the amount of people playing is incredible. It’s no doubt that soon Pokémon Go will surpass Twitter in daily active users. 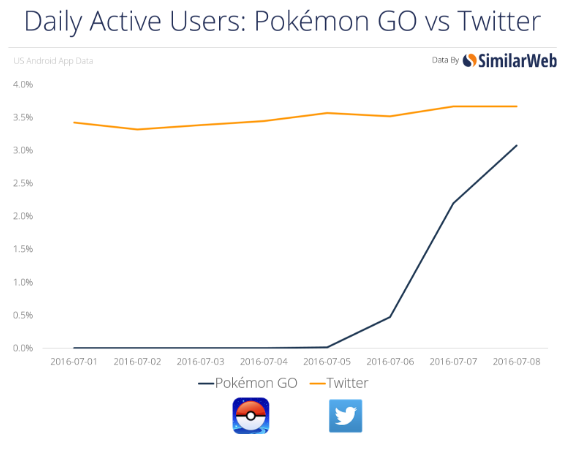 In an article by SimilarWeb, the app was being used for an average of just over 43 minutes a day, which is higher than Whatsapp, Instagram, Snapchat, and Messenger for Facebook; even Nintendo’s stock skyrocketed. Nintendo’s share price rose 24.52% to $193, its highest one-day surge since 1983. Search activity for the term “Pokémon” is at an all-time high, and by a considerable amount. 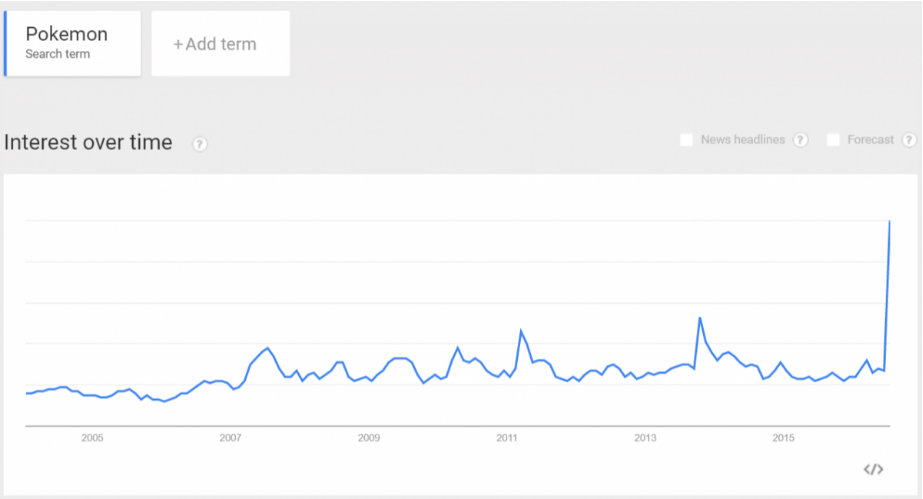 It has become difficult to scroll through any social media platform and not see a post referencing Pokémon Go. Have you noticed more people outside in parks or walking with their noses buried in their phones? Well, you can thank Pokémon Go for that.

The app is also considering additional upgrades like a chat feature and being able to battle and trade Pokémon with friends. These are ideas that the app can use to grow and keep it’s high level of engagement. Who knows how long this Pokémon phenomenon will last, but with frequent updates and the addition of Pokémon, I can see Pokémon Go being an app staying on a lot of people’s phones.

Why should you care about Pokémon Go?

So maybe you’ve never played or even heard of Pokémon in your life before a few days ago, but now you’re reading a blog about it and how it’s driving people crazy. But let’s take a serious look about what this app can teach us about reaching an audience.

Just like I talked about above, the game features Poke Stops and Gyms that are anchored around physical locations. If you’re a business owner with a store location, you may have noticed an increase in foot traffic around your store because of the game. But how are you using this increased traffic to your advantage?

You can offer free or discounted beverages to the Pokémon trainers since they probably have been walking all day. You can offer a charging station for their mobile devices (the game drains the device’s battery) or offer deals on portable battery chargers. Businesses are adapting quickly to take advantage of the influx of customers to their stores.

This also brings up another interesting point. Companies have contacted Niantic and asked if they can become a Poke Stop or a Gym. However, as of right now, they’re not allowing anyone to add new Poke Stops or Gyms. The locations were pre-determined by another app from the developer. But with the amount of inquiries Niantic has been receiving, they could potentially allow business to have their own Poke Stops for a fee.

One more thing to add, Nintendo has been very hesitant to release apps for mobile devices. Hopefully, the success of Pokémon Go will help them realize the opportunities they have to grow even more in the app stores.

Almost everyone in the KeyMedia Solutions office has the app downloaded, and everyone else that hasn’t downloaded it has heard about it. The rush of nostalgia is what’s getting people hooked and the app’s potential to grow even bigger is what’s going to help them stay on top of the app leaderboards.