Is Programmatic TV Advertising Right for You? 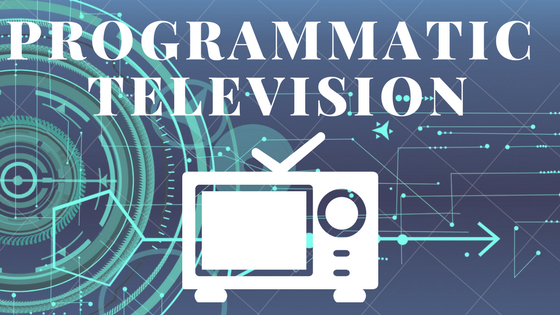 Something major happened in 2017 – for the first time in history, advertisers spent more money on digital media than on traditional TV.

This doesn’t mean that traditional TV is going anywhere soon, but it does represent a major shift in the way businesses are using advertising channels to reach their audiences. This new movement doesn’t mean that you need to pick one over the other. What if you could have the best of both worlds? With Programmatic TV, you can get the broad awareness impact of a TV campaign with the detailed precision targeting of a Programmatic ad buy.

Programmatic TV is defined as a “data-driven and automated process of buying and delivering ads on television video content, including serving those ads on mobile devices, connected TV’s, and across the web.”

The end of 2017 saw the highest rate of cord-cutters (3.4%) since the trend emerged in 2010. Not only are some doing away with paid TV subscriptions, there is an increasing number of young households who will never subscribe to a paid TV service. This new audience is called “cord-nevers”. Paid cable has become less appealing to consumers, who are opting in to more flexible and less expensive video offerings like Hulu, Netflix, and YouTube.

The good news is that people are still consuming video content – and a ton of it. However, it just looks a lot different than it did a decade ago. Programmatic TV allows advertisers to reach these consumers while they watch “Advanced TV”, otherwise known as any form of TV not watched through a broadcast, cable, or satellite connection on a television. As cord cutting continues, Programmatic TV advertising will allow marketers to stay in front of their audience.

One of the biggest areas of Programmatic TV advertising is the ability to target Connected TV (CTV) devices. CTV devices connect TV to the internet by gaming consoles, fire sticks, smart devices, or smart TVs. These CTV devices allow cord-cutters and streamers to watch premium content without having a traditional cable subscription. The content is vast, ranging from full episodes and live streams to Video on Demand content. 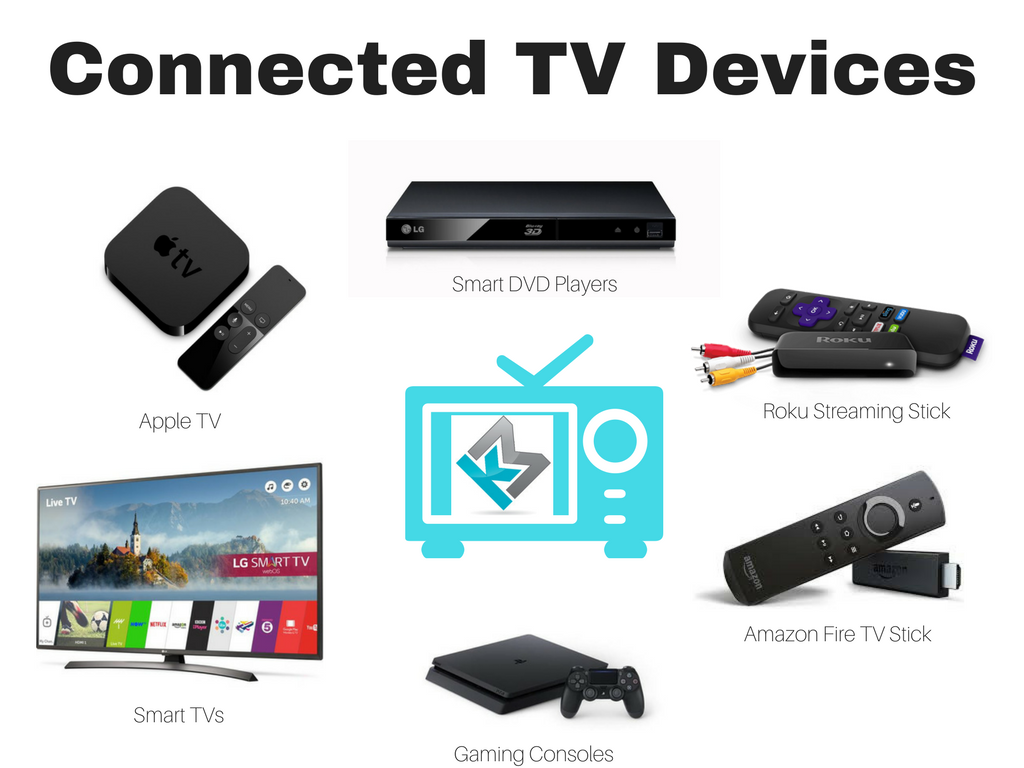 Why is any of this important? Because right now, more people use streaming video services more than cable subscriptions. 64% of people in the US own at least one Connected TV device. People are consuming video content on the go and are finding ways to get the content they want, when they want, for the lowest cost to them. Based on platform data, Connected TV devices also have significantly higher view completion rates (97%), compared to other digital video placements like desktops (61%), tablets (64%) and mobile devices (67%). This type of media placement ensures that your ad will be viewed to completion much more often by the people you want to reach. 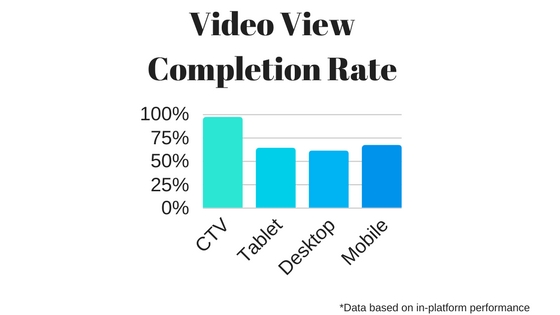 If you’re only focusing on traditional TV buys, you’re likely missing out on a significant portion of your audience. Programmatic TV advertising allows you access to reach your consumers on Connected TV devices.

Programmatic TV brings together the best of both worlds and offers something that traditional TV buys cannot. With Programmatic TV advertising, you can ensure your commercials reach the right audience every time, especially on CTV devices. Instead of targeting by traditional programming, hoping your target consumer is tuning in, you can focus your audience by data points through first, third, and lookalike targeting capabilities.

Third-Party Targeting: Based on demographic factors like age/gender, households with children or without, as well as purchase intent. This type of targeting can ensure that you are getting the most relevant eyes on your ads each time.

There is also the ability within campaigns to Retarget to people who have seen your ad or viewed it to a certain point of completion. These additional targeting capabilities make Programmatic TV advertising unique and more effective at reaching the right people with your brand’s message. 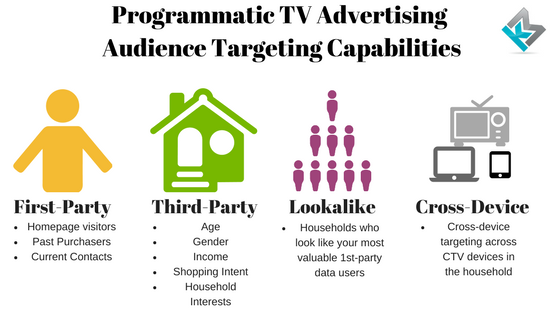 Results You Can Measure

Running your television advertisements programmatically can also provide additional insights into your campaign’s performance on top of providing standard traditional metrics. Here are the main points of measurement with Programmatic TV advertising:

In rare cases, Programmatic TV campaigns can also result in clicks to the website on certain content types and supply vendors. Although your goal for a campaign of this type should never be clicks to the website, it is an added bonus to have that direct conversion action.

Are You Ready for Programmatic TV?

Have you ever wondered if your ads are reaching the right people? The defined targeting capabilities of Programmatic TV advertising can make sure your commercials are viewed by the most relevant audience every time, no more wasted ad spend. 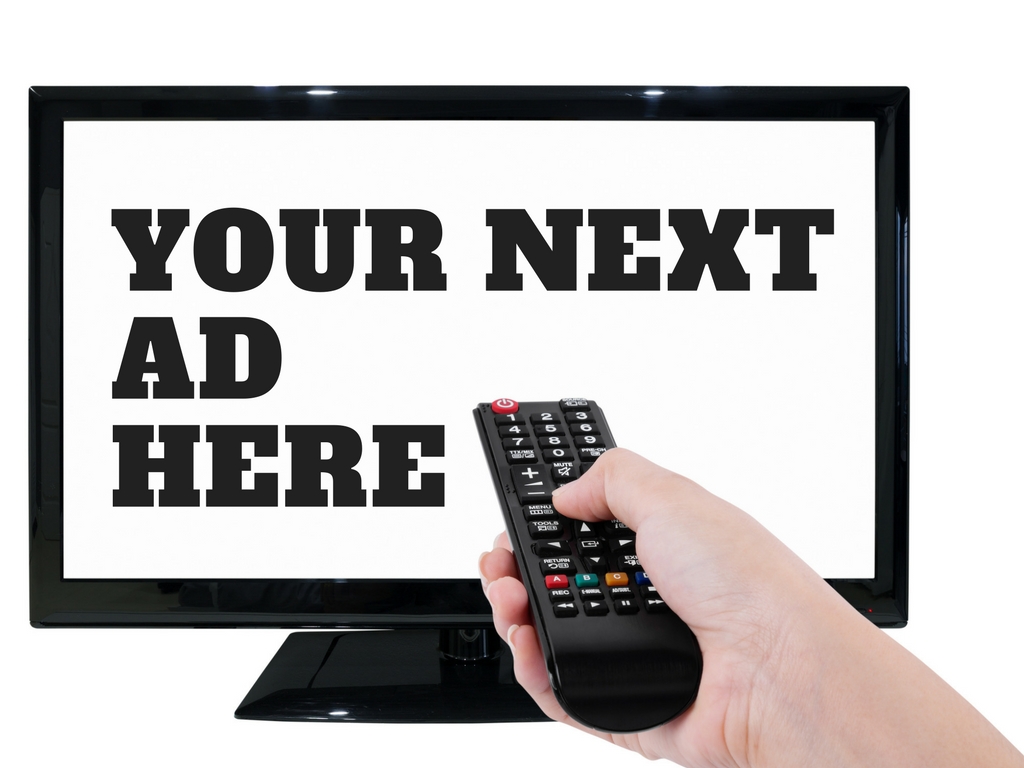 There are so many benefits to adding Programmatic TV to your existing marketing campaigns. The traditional television landscape is constantly changing, and more people than ever are expected to do away with their cable subscriptions each year. Getting started with Programmatic TV is easy and our team would be happy to help you plan and execute the perfect campaign for your business.