Making the Most of the Big Game

In less than two weeks, the Patriots and Falcons will take the stage in front of more than 110 million viewers. The big day isn’t just about sports though, as advertisers pull out all they have to gain and keep your attention for 30 seconds between plays on the field. Many of the major brands are spending between $5-5.5 million for their 30 seconds of fame this year. That’s just their media buy cost, adding in creation, production, public relations, and a digital push can put their actual costs much closer to $10 million. While this might be a great fit for big names in the industry, it simply isn’t feasible for 99% of other businesses.

Ten years ago every commercial that aired during the big game was a surprise. That won’t be the case in 2017 as brands are turning to the web to tease, promote, and share their spots before it airs on television. In 2015, more people watched the game’s ads online than on their televisions with more than 9 million shares and 483 million views online. Social platforms like Facebook, Twitter, and Instagram are making it easier for advertisers to gain more attention and reach wider audience before and after the game actually airs.

Some brands are opting out of the multi-million ad spot spend and running solely online. In 2014, Newcastle started the trend with their If We Made It campaign. Several other brands including Adobe, Nationwide Insurance, and Volvo have followed suit and shifted their strategies to a digital only focus. Check out the video below to see how Newcastle gained more attention for their commercial that didn’t even air during the big game than those that did.

If you own a business, chances are you will never be able to afford running an ad during the big game. You’re not alone, last year there were only 50 brand ads during the game from some of the largest media spenders in the world. Even if you had the money, splurging on an ad spot with over-the-top messaging will probably not give you the return you’re seeking. You may get 100 million views, but the percentage of those people who are in your target audience is most likely slim and including a call-to-action may make the ad less appealing, so really it’s a lose-lose situation.

Instead of spending your life fortune on an ad spot, think about ways you can tie in the big game to your social media presence in early February. Plan out which platforms you want to use, products or services you can tie into your marketing, and how you or your staff is going to use the accounts before, during, and after the game. If you’re a local restaurant, you could run a special that relates to the score of the game, like wings for the price of the Patriots score following the day after the big game. If you don’t have a product or service to tie in, try just having conversations with your followers. Ask them who they’re rooting for or post a company rivalry photo, have fun with it. Remember 2015’s Left Shark halftime performance? Americans, celebrities, and brands all took part in the conversation and amusement of Left Shark. One company ever started a kickstarter funding for replicating the costumes. 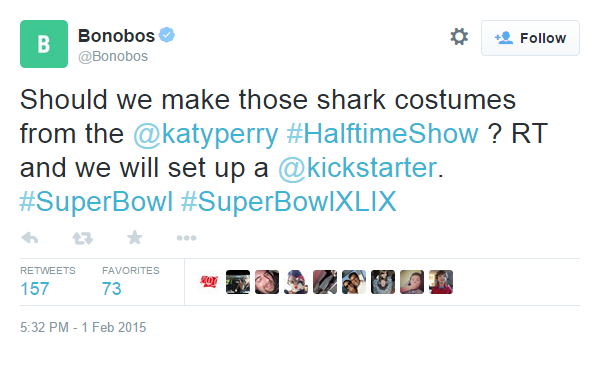 You can also use paid tactics like Facebook Advertising to extend your reach. Some places like supermarkets, electronic stores, and sports apparel stores really benefit from advertising specials for the big game before it happens.  Just recently I received an ad on my Facebook timeline featuring hundreds off a big screen TV just in time for the big game. Have a fun video or commercial you want to distribute? Try using paid channels, like Facebook, YouTube, or Twitter to promote your video leading up to the big game. People will be online searching for the funniest and most clever commercials that aired on TV, giving you a chance to get in front of them with your video.

Pro Tip: The term “Super Bowl” is trademarked (so is “Super Sunday”) and pretty heavily enforced. Unless you have the rights to use the terms, find alternative ways to get the message across in your paid advertising. Big game is not trademarked and is the most common way to refer to it, so consumers will most likely know what your talking about.

You might not be advertising in this year’s big game, but you can certainly find ways to capture the audience online without spending $5.5 million dollars. With the crossover of television ads to online releases, people are spending more time watching commercials online. Social media will be buzzing the night of the game, so be sure to think of a strategy to connect with fans across the nation.  Don’t forget to tune into the game February 5th to cheer on your favorite team and to see some of the funniest, weirdest, and most memorable commercials. You can watch my all time favorite big game commercial from the year 2000 below. May the best team win!