The Worst Change to Ever Happen Online

On May 11th 2016, something terrible happened to hundreds of millions of people around the world. Millions took their cries and outrage to social media, venting over the horrific circumstances that were released upon them. I remember I was sitting at my desk that morning when I first heard about it. Terrified, I opened my phone to see if it was true. I clumsily searched my home screen icons looking for the small brown camera logo, and that’s when I saw it. A combination of reds, blues, and yellows with a white camera looking square in the center was now sitting where my ever familiar Polaroid logo used to be. Life would never be the same, or would it?

As you may have figured out, Instagram released their latest update on May 11th which included a new logo and overall new look inside the app. Although no general functionality of the popular picture and video sharing app was changed, people, including myself, still managed to lose their minds over changes that they’ve probably forgotten about in the past two weeks anyways. 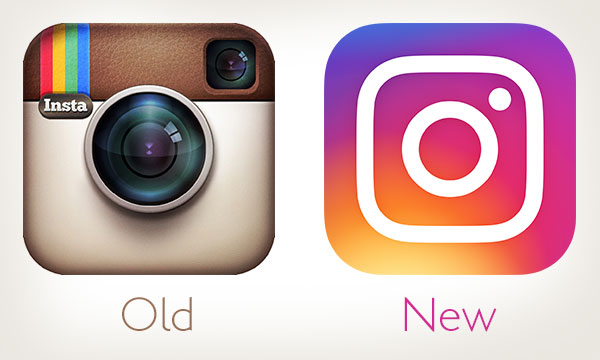 Instagram isn’t the first (nor will they be the last) social media platform to make updates. In fact, a few weeks ago I saw an old Timehop post of mine from six years ago where I was whining about the new Facebook newsfeed change. Do I still care about that update now? Absolutely not, I don’t even remember what the ‘old’ Facebook newsfeed looked like. So today I’ll examine why people are so resistant to change, especially on social media and hopefully by the time the next major update comes out, you and I can embrace it, rather than hate it.

Why We Hate Change

There are many reasons why people hate change in any and every aspect of life. An article by Harvard Business Review gives ten reasons why people resist change, I’ll elaborate on the three that are most applicable to the social media change we often experience. By knowing why we dislike something, it is easier to move past the frustration and be quicker to adapt.

When I opened my beloved Instagram app the morning of the big update, I felt instant defeat. I liked how my photos looked in the feed before and suddenly I didn’t have a say to change it back. One of the biggest reasons people get so upset by changes on social media platforms is the loss of control they feel. Social media is one of the things that feels very personal and customizable. People are able to choose their friends, the content they want to share, and many other variables. They truly believe the platform caters to them, but once an update changes a small aspect of the platform, users are brought back to reality for a second. It is then that they realize that someone else is controlling what they are seeing or how their content is going to look and then leads to the anger that soon follows.

Did anyone know that Instagram was about to change their logo and look on a cool spring Wednesday? Besides developers and those behind the scenes, we were all in the dark about the change that was about to hit us. Most social media changes come unannounced, probably because either way people won’t be happy so why let them make a big fuss about it before hand. Earlier this year, Instagram talked about changing the algorithm of the feed, but people went crazy threatening to boycott the app, which led Instagram to hold back on releasing the new feed for now.

Even though absolutely no functionality of the Instagram app changed a few weeks ago, it was still more work for people to look for a new icon and adjust their eyes to the app’s makeover. I personally believe this is the reason most people take to complaining about change, because no one likes to work harder for something that once came easy. Fortunately, this extra work is overcome rather quickly once the mind and eyes get used to the new updates. For the first three days after the update, I didn’t even open the app because my mind didn’t associate the rainbow of colors sitting on my home screen with the app I used to visit every day.

You may or may not be familiar with the diffusion of innovations theory, which seeks to explain how new technology and ideas spread. The curve below shows the five categories of product adoption, and the percentage of people who fall into those groups.

This curve is often used in marketing classes to show who to target when releasing a new product into a market, but it can also illustrate the rate at which people will accept change and innovation in products. When a new social media update is released, only a small percent of people fall in the early adopters stage. This explains why people who are most hesitant to try the new product (or new look in our case) are frustrated with the change because they weren’t ready yet.

As the days or weeks pass, more people begin to adopt the newest change, and become brand advocates telling their buddies that maybe a new colored logo isn’t all that bad after all. Rounding up the pack are the laggards, who are probably still on twitter preaching their frustrations to fellow laggards. Eventually, they too will learn to adopt the new update, forgetting why they ever hated it in the first place.

Put Down the Pitchfork

If the past decade of social media has taught us anything, it’s that change is inevitable. Hashtagging #boycottinstgram isn’t going to suddenly change your app back to an old version. There is a reason why platforms continue to change, often because they’re improving the software to make things easier for you! If you can get over the initial learning curve, it will be smooth sailing until the next big update. Just remember, people once threw a fit of rage when Facebook started showing only the most popular posts several years ago. If they hadn’t, you would still be seeing posts from that friend obsessed with Farmville.  I have to constantly remind myself that change isn’t a bad thing. So the next time you see your favorite app update, take a deep breath and remember that you’ve survived the hundreds before, and will survive the hundreds from here on out.