Is Ad Blocking Killing the Web?

If you’re like me, you might hate intrusive ads popping up left and right while exploring the internet. If you’re also like me and 69 million other Americans, you’ve probably downloaded some type of ad blocking software to make your online journey more enjoyable. It’s estimated that by 2017, 86.6 million people in the US will be using ad blocking software, according to an eMarketer report. 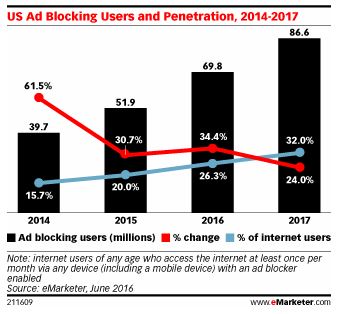 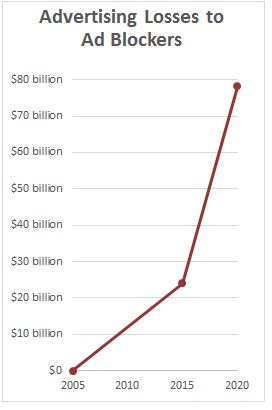 With the growth of ad block comes the decline of advertising revenue and a massive headache for both advertisers and publishers. In fact, according to research firm Ovum, publishers lost $24 billion in global revenue due to ad blocking last year. The losses are predicted to reach almost $80 billion by 2020 as consumers jump on the blocking trend. As people block ads, publishers lose out on impression opportunities that used to be certain. One thing is for sure though, ad blocking technology isn’t going to vanish anytime soon and advertisers need to re-think their online messaging before they’re blocked out entirely.

The Rise of Ad Block

Ad block software was first introduced in 2006 but didn’t see much use until recent years. It’s still more common for people to use Ad Block on their desktops. In fact, 90.5% of ad blocking users will block ads on desktops and laptops while just 29.7% will do so on smartphones. Senior eMarketer analyst Paul Verna says this is because “Screen sizes are large enough to accommodate multiple ads. This includes videos that might be out of view but still audible, which are especially annoying to users.”

The software, usually able to download for free, allows consumers to block almost every ad that would potentially be served to them during their time online. It only takes seconds to install the extension which currently runs on almost every single browser including Chrome, Safari, and Firefox. The ease and free cost makes ad blocking software a no brainer for annoyed internet users. The question then becomes how can publishers and advertisers battle ad block to continuing serving their messages and advertisements?

In a strange twist of blocks, many publishers are now blocking people who have their ad blocking software enabled. Wired, Forbes, GQ, and the New York Times are a few of the major players who have resorted to turning away those using ad block or asking them to pay a small subscription fee. Wired released this statement when it announced earlier this year that it would start blocking those users.

“On an average day, more than 20 percent of the traffic to WIRED.com comes from a reader who is blocking our ads. We know that you come to our site primarily to read our content, but it’s important to be clear that advertising is how we keep WIRED going: paying the writers, editors, designers, engineers, and all the other staff that works so hard to create the stories you read and watch here.” 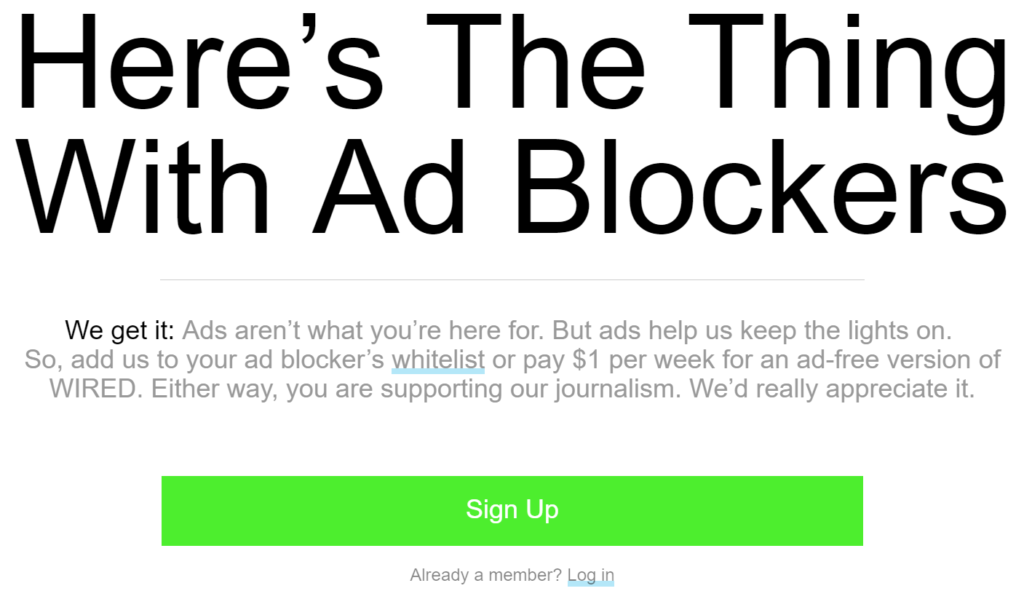 Forbes also blocked users from entering the site until they disabled their ad blocking software in late 2015. In exchange for allowing ads, Forbes promised those ad blockers an ad-light experience. Forbes staff member, Lewis DVorkin, reported on some initial results at the beginning of the year stating that 42.3% of desktop users with ad block enabled turned off or white listed the site to gain access to an ad-light experience. As these major publishers experiment on alternative ways to deal with ad blockers, you can expect to see more jump on the bandwagon to block the blockers. Interestingly enough, in the case of Wired, people were more willing to turn off ad block than pay a fee, proving that people still value free content over ad-free content. 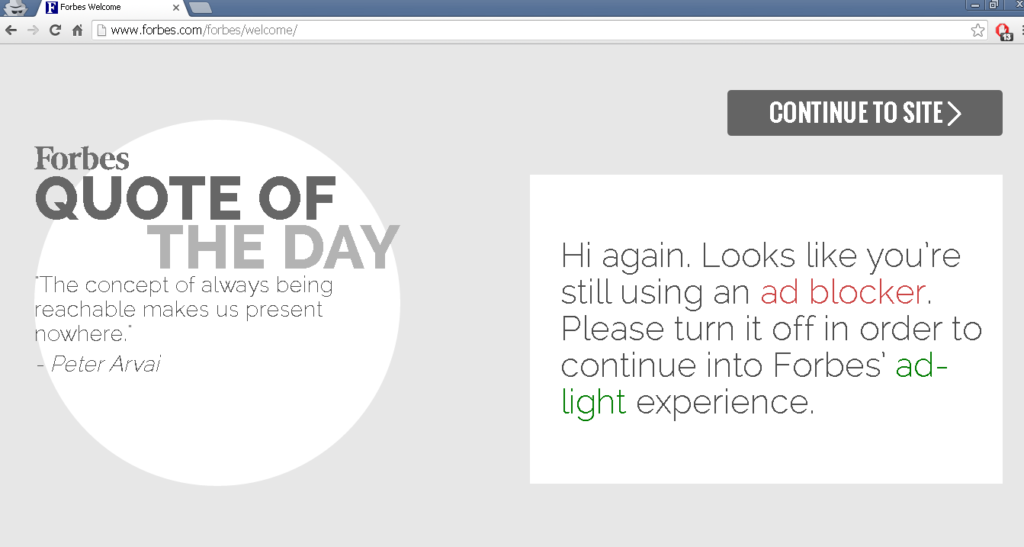 Pay to be Paid

Another way some publishers are getting around ad-blocking is by paying to have their sites white listed and subsequently shown to those who have ad block enabled. The biggest names in the web including Microsoft, Google, and Amazon have all made confidential deals with the largest ad blocking software company to have their names white listed. The price they paid has not been disclosed, but white listing smaller sites is a relatively small fee. The problem with this method is that it only raises the costs for everyone involved in the process. Marjorie Gray, a brand manager from Dish, put it well when she was quoted, “As a marketer or brand, I’m already paying an agency and publisher to advertise on my behalf, and now I have to pay another fee to be white listed.”

Be the Good Guys

Perhaps the best, and most logical solution to this ad blocking dilemma as marketers and content producers is to give the consumers what they want. I’m in no way advocating for an ad-free web space, because the only way for creative content to be produced is to be paid. I would much rather have a free web than pay for access to content for an ad-free experience.

The balance comes from both sides of the argument. Advertisers need to deliver relevant ads and publishers need to develop compelling ad experiences that consumers won’t want to block. “Acceptable ads” or ads that don’t interfere heavily with the user experience like pop-ups, dancing automation, and auto-playing videos are needed more than ever. Despite the attention grabbing factor of intrusive ads, consumer annoyance usually outweighs any desire to click-through to those types of ads. Acceptable ads by ad blocking definition are able to get around the software and be white listed. This is most likely the best type of action to take on the war of ad blocking.

Is the Web Doomed?

Some may say that ad block is killing the web, others would argue that advertisements killed the web long ago. The real answer falls on the course of action publishers and marketers make in the next couple of years. Blocking readers, buying their way out, or requiring payment for access might just drive users crazy enough to retaliate even further. Instead, the focus should be coming to a balance, where advertisers can share their message without taking away from the overall experience. At the same time, consumers need to realize that the content they love comes from someone who needs to be paid at the end of the day.

For now, consumers will continue to block intrusive ads while publishers block the blockers. 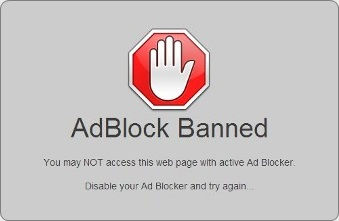