Is Marketing with Emojis right for you?

Over 3,000 years ago, the ancient Egyptians used pictures and symbols called hieroglyphics to tell their stories. Thousands of years later in the world today we continue to use a similar idea to communicate to each other. Emojis have become modern day hieroglyphics in the way we use them in messages and social media.

As businesses continually try to connect with customers in any way possible, many have tried incorporating emojis into their marketing. Today’s blog is going to help you try and find out if marketing with emojis is the right fit for your business.

Emojis have taken over a significant part of online communication. According to a study from Emogi, about 92% of the online population use emojis in texts and social medial. Some common ways people use emojis are to:

The term “emoji” has become so popular that it was named by Oxford Dictionaries as Word of the Year for 2015, which means that we weren’t surprised when we noticed an increase of branded messages that included emojis. It’s common for brands to attempt to be part of a trend. Some brands excel, but there’s always the risk of trying too hard and having a voice that sounds forced.

Should your brand use emojis?

Emojis may help a brand add a personal element to its marketing messages and create an additional appeal to its audience, but this doesn’t mean that every case is similar.

Before diving in to the world of emojis, here are some things to consider:

Once your brand is ready to include emojis in your next campaign, you might need some inspiration on the best possible uses to do so. 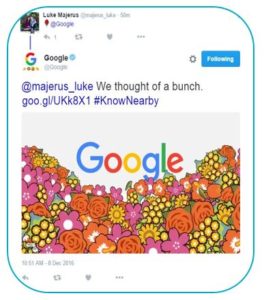 Recently, Google announced they will be able to interpret emoji via its Twitter handle. All you have to do is tweet an emoji to @Google and the service will give you relevant results.

For example, if your wedding anniversary was coming up and your significant other loves flowers, you could tweet a flower emoji to Google and they will respond with a GIF and a link for flower shops nearby in a matter of seconds. Google says the feature will work with over 200 different emojis for food, sites, and activities near you. It’s also promised some “Easter eggs.” 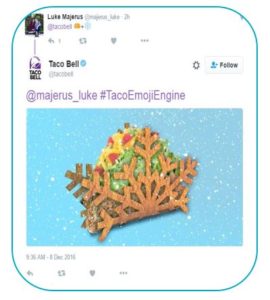 Taco Bell launched a campaign to ask for a taco emoji and its Change.org campaign had over 30,000 signatures for its request! Once the taco emoji finally arrived, Taco Bell took to social media. They created over 600 GIFs and photos to celebrate the emoji’s arrival. Taco Bell created the #TacoEmojiEngine, an engaging way to interact with its customers. And it’s still working today! 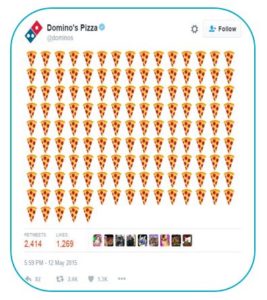 Domino’s created one of the most popular and iconic emoji-related campaigns when they asked for customers to order pizzas by tweeting or texting the pizza emoji. The customer still has to go to the website to verify their order, but it still was a creative and fun way to give their customers a new way to order pizza.

Use emojis to tell stories, to stand out, or to show emotions greater than words. Emojis represent the future of marketing: expressing emotion, which builds trust: which is exactly what we as marketers aim for. They are trendy, and probably here to stay.